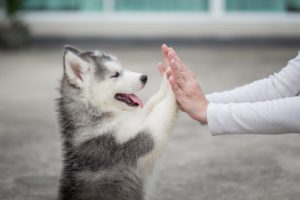 “Great melodies have a lot in common with great ideas. They’re instantly memorable.”

In honor of the much awaited AdWeek NYC, we’re taking a look back at some of the most memorable marketing campaigns. See real examples of how brands of all sizes are creatively using big data insights to transform brands, promote admirable causes and provide unforgettable experiences:

This year Snickers launched a quickly-famous campaign, “You’re not you when you’re hungry”, that really came to life with the launch of the Hungerithm algorithm in Australia. The idea behind this ingenious campaign is simple: the angrier Internet goers become, the cheaper the price of a Snickers bar.

The Hangerisim algorithm worked by analyzing 14,000 social posts per day from Facebook, Twitter and YouTube, allowing Snickers to measure the moods of Aussies on politics, sporting events, TV spoilers and simple day-to-day bring-me-downs such as traffic jams or crummy weather. Cranky Aussies at the brink of a “hanger” crisis were sent personalized promo codes with a witty message inviting them to purchase a discounted Snickers. As a result, a whopping 6,600 coupons were redeemed and the price of Snickers fluctuated 5000 times in a 5 week period. Not only were sales up, but traffic and consumer engagement were at an all-time high with a 1,740 percent increase in Facebook traffic. Jane Wakely, CMO at Mars Inc, describes their success; “Hungerithm hit the exact digital sweet spot we were going for—the point at which media, content and commerce collide.”

Data-driven advertising isn’t just for the big dogs. The Amanda Foundation, a nonprofit Animal Rescue, uses demographics and browser history data to introduce animals in need to potential owners via programmatic banner ads. For example, bookworms might be matched to cats, whereas outdoorsy folks might be introduced to an athletic pup.

This heartfelt, data-driven campaign not only saves the lives of furry little ones, but it also brings together families based on common interests.

Besides being the number one video on YouTube in March 2016 and racking up 51 million views, Always’ Girl Emojis campaign inspired real change. After hearing the voices of real girls and viewing discouraging stats, such as that 72% of young women feel society limits them with preconceived ideas of what they can and can’t do, companies like Unicode Project and Google were inspired by the campaign that resulted in the promise of the launch of new emojis representing professional women.

Not only that, but the campaign caught the eye of, and gained support from, major influencers such as Former First Lady, Michelle Obama, and Women’s Rights Activist, Emma Watson. Together with the hashtag, #LikeAGirl, Always set out to encourage and empower young women.

Starting the gift of reading at Christmas

If Sainsbury’s heartwarming Christmas tale doesn’t pull at your heartstrings, a look at what they did with the success of this campaign certainly will. In partnership with author Judith Kerr, and HarperCollins Children’s Books, Sainsbury published a children’s book encouraging parents to spend more time with their young ones using the hashtag #ChristmasIsForSharing.

The campaign received 30 Million views and raised $1.8 Million for a meaningful cause. All proceeds from the book sales were given directly to Save the Children’s UK literacy programs.

Spotify certainly knew how to close out the year with a hilarious and witty campaign based on its very own listeners’ usage data. In an attempt to remind us all that we all have something in common and we’re all just a little bit weird, The Digital Music Service, posted digital & physical ads in 11 different countries with some serious ringers including: “Dear person who played “Sorry” 42 times on Valentine’s Day, What did you do?” or “To the person in NoLita who started listening to holiday music way back in June, You really Jingle all the way, huh?”

This data shares some peculiar insights into the emotions felt around the world, such as the “Dear 3,749 people who streamed “It’s the End of the World As We Know It” the day of the Brexit vote, Hang in there”. The user data was gathered from 164 localized data stories and was ultimately shared more than 669,000 times on Social Media. The ads were met with such enthusiasm that Spotify subscriptions met a record high upon their release last December. 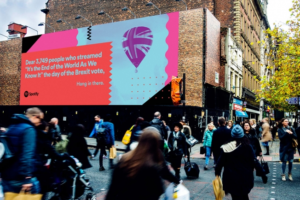 We’d love to hear from you! What’s your strategy for planning a stellar marketing campaign? Learn how Sweetspot empowers marketers to turn their Big Data into useful data!