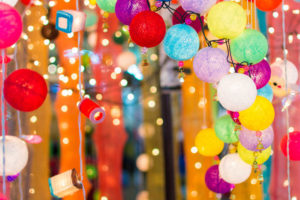 At first glance Tumblr can seem like a chaotic jumble of images and text, but this platform thrives on the sharing of just about anything: from textual posts, images, quotes, and links to music or videos. Tumblr clocks in at 550 million monthly active users, placing it just above popular channels such as LinkedIn or Pinterest.

A major hit among millennials, with 69% of users ranging from 18 to 34 years of age, this microblogging site is all about allowing users to express themselves. Its non-traditional format even allows them to personalize the layout of their blogs down to the very last detail – which is a major perk for brands. Pages can even include direct links to drive traffic to corporate websites or other social channels.

Should I market on Tumblr?

While each social network has its own language, Tumblr has a remarkably unique culture within which many subcultures and niches exist. So, if you’d like to market on Tumblr it’s crucial to know exactly who your audience is and the language they speak. For example, you’ll find Tumblr groups that use irony or slang when interacting and posting on the platform. Kevin Shively, Senior Marketing Manager at Simply Measured, explains that  “Understanding the network and audience you’re marketing to is crucial no matter where you are, but even more so on Tumblr, which has managed to maintain an ‘underground appeal’ to a lot of niche markets.”

Intimidated? Don’t be! If you’re not quite sure what type of content your audience engages with or how to reach them, experiment and spend some time on Tumblr’s “Explore” page. There you’ll be able to see what’s trending on Tumblr by content type, search words, and view suggested profiles that are performing well. Like some of their content? Reblog it! Reblogs are just like retweets or Facebook shares.

Additionally, you can use tags. These are Tumblr’s equivalent to Twitter hashtags. Not only will your posts be categorized by the tags you assign to them, but they’ll make your content visible to the communities following those specific interests. Make sure to only assign relevant and popular tags to extend your reach.

How are marketers using Tumblr?

One could argue that Tumblr’s strength lies in visual discovery, as images account for 78% of all posts. Therefore it’s no wonder that trendsetters from the fashion and entertainment industries absolutely strive on this platform as they are able to circulate and repurpose their creative content. Take MAC, a popular cosmetics brand, as an example. They give Tumblr users a unique backstage pass to fashion shows from around the world, introduce users to the artists, and provide high-quality how-to videos. 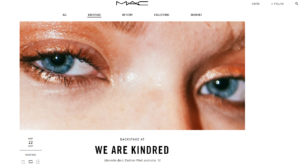 Brands such as Vans also use rich imagery to engage with their audience and reinforce their lifestyle values. In addition to their music and art pages, where fans are able to share their #vansart, the Vans girls page encourages women to be their own authentic self and even provides DIY projects for women to personalize their own style. 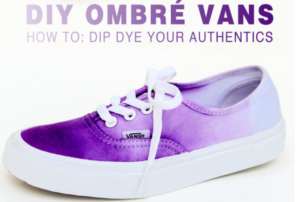 Tumblr is full of creative spirits, so why not ask them to help you build your line? That’s exactly what ASOS did. A case study following their paid “Design us a t-shirt” campaign, details how ASOS received 900 entries, of which they selected 4 designs to produce. These sold out in a short 10-hour time span!

An ASOS spokesperson shared in their enthusiasm, and announced plans to kick off a swimwear competition in the future: “The T-shirts were a great success! They flew off the shelf without any other media spend behind them. It was just a really great story and an opportunity for our customers to influence the products they see on-site.” 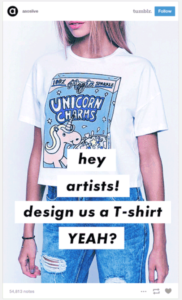 Spirit is an excellent example of using customer reviews to boost brand reputation and referrals. In conjunction with their “More saved is more to spend on the other end” campaign, travelers are invited to share their special travel memories. A quick look at their Tumblr page and you’ll scroll through post after post of fan grams and fan mail with cheery photos and stories about what travelers did with the extra cash they saved from traveling with Spirit.

Other airlines, such as Delta, are also stepping up their Tumblr game. We’ve all seen Facebook and Twitter used for customer service, but Delta has taken Tumblr on as another platform to increase and address customer queries and support. Similar to Spirit, they also allow travelers to share stories about their adventures, and run a witty and fun feed, filled with images uploaded straight from their followers. 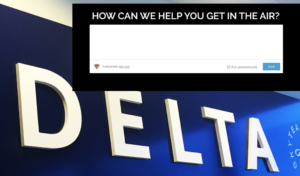 Stir up your audiences competitive spirit

Jaguar embraces Tumblr to promote cross-channel campaigns and competitions such as their “Live Fearless” campaign where they entice users to share their stories on living fearlessly in order to win a luxury rental for one week. Their #livefearless hashtag is growing in popularity across channels, seamlessly bringing their efforts together and building a strong following.

Would you like to spread your content even further? Tumblr invites marketers to approach paid promotions in three different formats:

Sponsored Posts: boost post visibility and reach by targeting audiences by location, gender and interest, directly from their dashboard.

Sponsored Videos: video posts play on a continuous loop and even pop out so that users can continue to watch as they scroll. Additionally, sponsored video data includes metrics such as video loops, views and engagement.

Sponsored Day: take over Tumblr for a day & tell your brand’s story with this unique promo. Your logo and tagline will appear across the top of the dashboard and will link to a unique tag in the ‘Explore’ area. There you can compile a collection of your own content, posts you’ve reblogged or a mix of the two.

Advertisers can measure the success of their campaigns with metrics collected by Tumblr’s Advertisers Analytics tool. Metrics include:

As for your organic content, Tumblr does not provide metrics beyond likes and reblogs. They do, however, partner with tools such as Crimson Hexagon, Adobe Analytics and Google Analytics to allow you to retrieve more detailed data.

For example, you can pull the following metrics on your Tumblr performance through Google Analytics:

Already marketing on Tumblr? We’d love to hear your tips for finding your niche!

[…] even have their own art page where they feature users’ artworks) and designers. So what did ASOS do? They bought a sponsored post to host a contest where Tumblr users designed new shirts for the […]