How to build the ultimate campaign dashboard 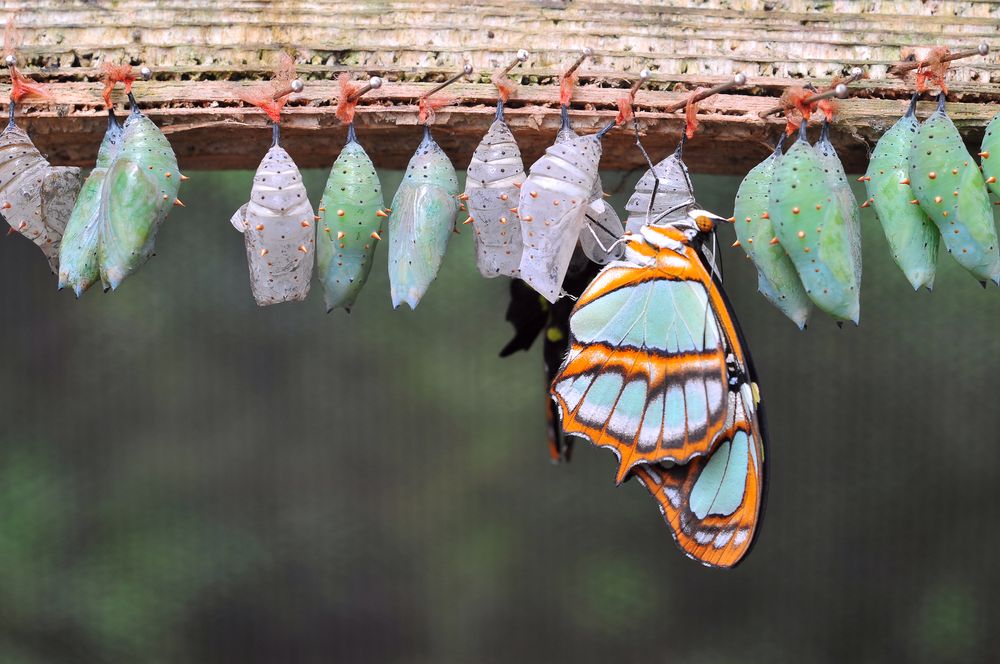 Campaign Marketing is a little different from other areas. While content or email marketing, for example, may have varied objectives from building brand awareness, to generating leads or increasing revenue, Campaigns are generally focused primarily on conversions.

Whether those are micro conversions such as signing up for a newsletter or watching a video, or revenue conversions such as making a purchase or downloading an app, this relatively singular focus mean that even where conversion type varies significantly, dashboards will likely be similar.

We generally see a quite narrow focus of tactical metrics, strategic KPIs and data visualizations across campaign dashboards, so let’s jump right into these.

Your campaign manager will want to explore both the performance of individual campaigns and totals across their efforts. Understanding the reach of your campaign, the level of Engagement of your target audience, how prospects behave both within your campaign landing page and before getting to it, together with their ongoing level of interaction with your brand, will help you to improve the content of your campaign and placement in order to best target your key segments.

Conversion and cost information, however, will be the ultimate measures of success on a campaign dashboard and should therefore always take visual precedence as the metrics that matter the most.

Here are some sample metrics you may wish to use on your tactical dashboard.

Campaign summary for your executives

Your executives will likely be extremely interested in your campaign performance. While costs over time for Content and Email Marketing departments may be relatively steady as they map out content plans and stick to consistent, or mostly consistent, publication schedules, campaign spending can be erratic and costly. Where a large amount of investment is being made in a campaign, your executives will want to see results. Primarily in the form of conversions. To show them the impact of your initiatives, you may want to share these KPIs on their dashboard:

Your executives will definitely want to know how much is being spent on campaigns. Total Budget spent should always be included, and you may wish to accompany this by some other metrics depending on the level of detail your executives request.

You may wish to include, for example, Total Budget Available, % Budget Spend, Average CPA, CPA per campaign, Average Cost per Conversion, CPC per Campaign (or again, to show only the CPC for the best and worst performing campaigns).

Your dashboard would be incomplete without a Total Campaign Revenue KPI. Comparing revenue across campaigns should always be done in the context of costs, however. It doesn’t seem logical to compare a 2-hour campaign in which $2,000 was spent with a 4-week campaign costing $20 million, for example. Therefore, ROI is the best way to compare the Revenue impact of individual campaigns, or to look at the average success of your campaigns in monetary terms.

While an ROI KPI may be valuable for executives needing to measure the success of individual campaigns or to compare campaign marketing efforts with other activities, there’s a risk it could also prove misleading with regards to the true impact of a marketing initiative.

ROI is calculated as (Return – Investment) / Investment and the results it yields will therefore greatly depend on the time at which ‘Return’ is measured. If you measure ROI only a short time after the campaign has run, you will inevitably lose some of the return value that you will likely gain in the future by turning campaign acquisitions into loyal customers.

Therefore, to improve this measurement, the Average Customer Lifetime Value of Campaign-acquired customers should be included.

Generally, understanding the loyalty of this segment will also help executives to better allocate marketing budgets for both short term and long term impact,

Data Visualizations to improve understanding on your Campaign Dashboard

In order to understand how well your campaign is functioning, context is key. While exploring performance over time is fantastic for helping to understand if you are improving based on prior learnings, as each campaign may be unique in its conditions or conversion type, it may be more pertinent to explore results per campaign. 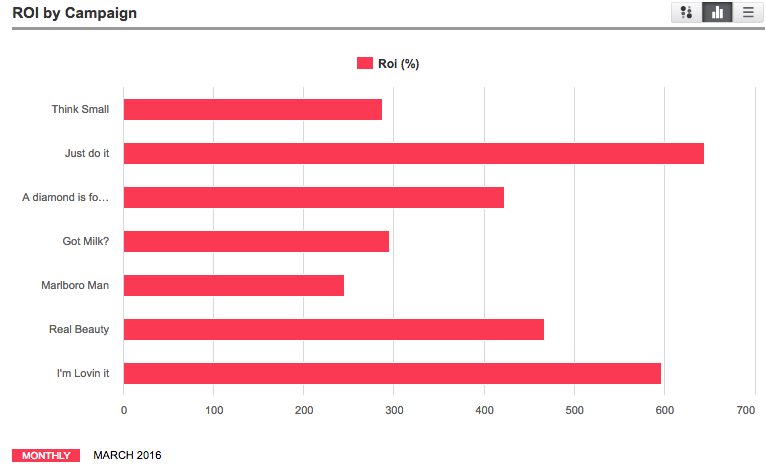 The chart above breaks out ROI by campaign and is a great visualization for helping you to quickly understand which have been your most successful campaigns. 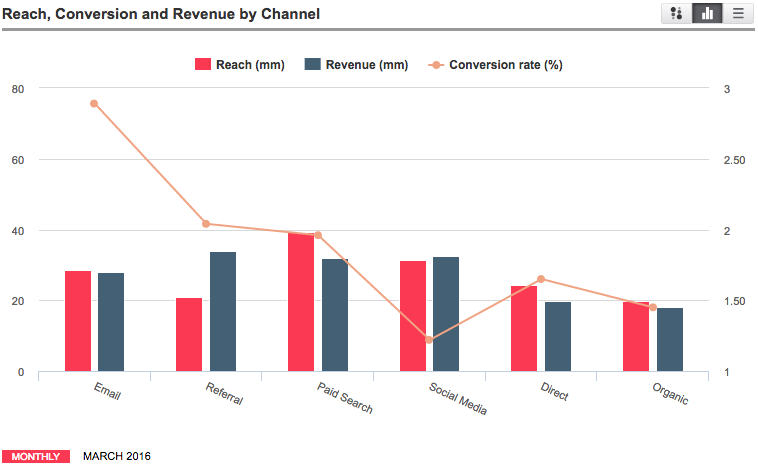 This combo chart allows you to quickly compare which channels have enabled you to attain the highest Reach, Revenue and Conversion Rate. The chart above doesn’t show significantly strong correlations between these three factors, but taken in isolation we can draw some interesting insights. Social Media, for example, has quite a low conversion rate compared to the other channels but still produces relatively high revenue. As Reach isn’t disproportionately high, we may be able to infer that those coming from Social Media have higher Average Order Values AOVs than those from other channels. 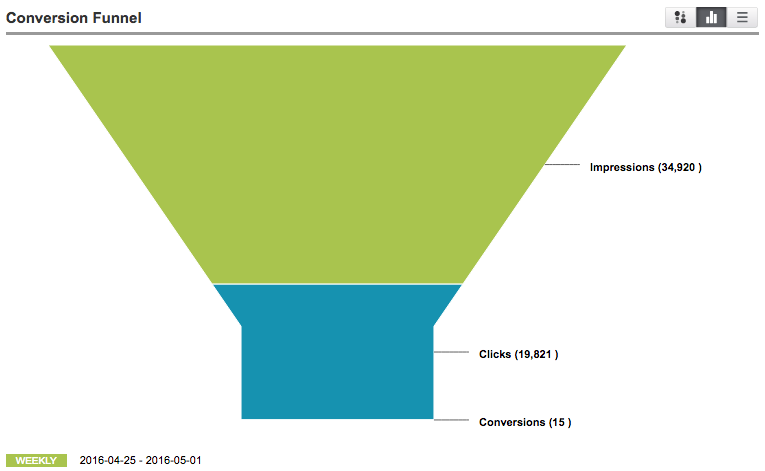 Your campaign dashboard simply won’t be complete without a conversion funnel. The example above shows only three stages: Impressions, clicks and conversions, but depending on your own campaign stages, you might need to add a couple extra. Adding percentages to your labels can also allow you to view the rate of conversion between different stages of the funnel.

How do our recommendations compare to those metrics you share within your Marketing department? Do you think your CMO would be happy to receive the executive version of this dashboard?

VP of Business Development for Sweetspot. Responsible for strategic brand development, marketing and business development. BA/BComm graduate from the University of Melbourne. My passion lies in finding creative solutions and encouraging collaboration.