A focus on visualizations: Spider charts

Today we’re taking a look at every sports lover’s favorite data visualization: the spider chart. Ask any major fanatic and they’ll tell you there is no better way to see how two players, or teams, stack up. Imagine you would like to see how two of the most famous NBA players in history compare, or maybe you want to create a strong fantasy team. When comparing players, there are a number of skills that reflect their talent, such as: rebounds, steals, assists, points, etc., With a spider chart you have the ability to simultaneously observe all the variables you would like in one chart! Making it easy and fun to analyze, pick the best players for your fantasy team, or just to educate yourself on some of the most talented individuals in the business. 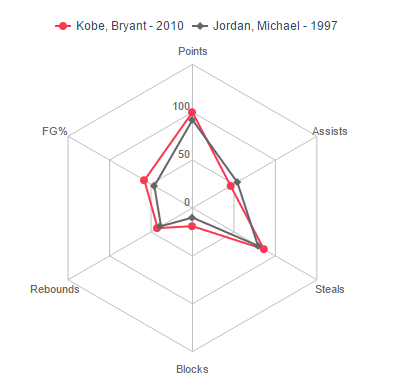 Sports are undeniably entertaining to analyze, but there are an endless number of valuable metrics that can be compared using a spider chart, making it a powerful visualization for any report. Initially the spider chart can be a bit overwhelming, chaotic even, but it is actually much simpler and more useful than many people think.

The first thing you may notice is the odd shape of the spider graph. While not as traditional as many visualizations, the strength of this graph lies in its ability to demonstrate multiple dimensions at the same time. The form of the chart is determined by the number of dimensions the analyst chooses to measure.

Let’s consider an example from the travel industry. In order for a cruise liner to provide their passengers with the best travel experience they may want to take surveys of customer satisfaction of the trip’s ports. There are number of factors that may influence their experience such as the cleanliness of the port, the activities available to them, and the overall scenery. All of this information can be compiled into one spider chart which allows the cruise liner staff to visually analyze whether the ports are of a high standard of excellence, or not. 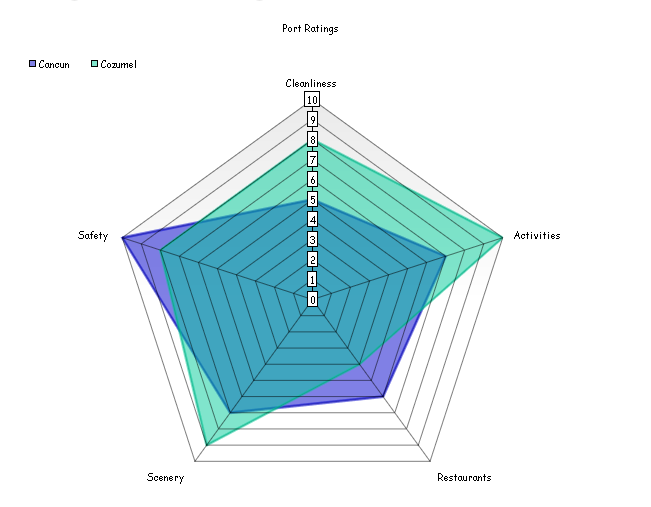 The dimensions of the spider graph are determined by the number of variables measured, in this case by all the metrics that jointly determine the KPI customer satisfaction. The spokes, also called radii, are equal-angular, and the data length of each spoke is equivalent to the magnitude of each variable. In order to give a unified view of how each variable performs together, there is a line drawn connecting each spoke.

Spider charts are generally not our best option when:

An advantage of this visualization is that more than one series can be represented at one time, allowing the analyst to compare variables across multiple dimensions simultaneously.This allows dashboards viewers to quickly find the information they need in one view. However, be careful not to measure too many series at once, so that the spider chart remains clear and easy to read. 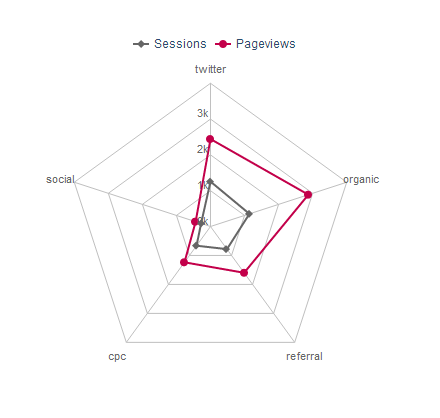 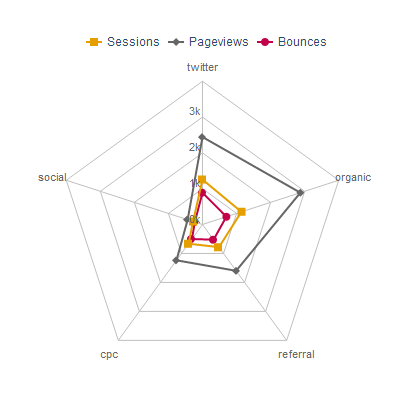 The most straightforward approach to presenting a clear spider graph is to use the same scale along each axis, however, there is nothing prohibiting axes representing wildly different scales since they are nominally independent. Fully interpreting a chart with multiple scales requires a conscious effort, which in many cases means time wasted, and room for error.

At Sweetspot we recognize the importance of clarity in reports, which is why we do not allow the radii to be defined by more than one scale in the same spider graph. 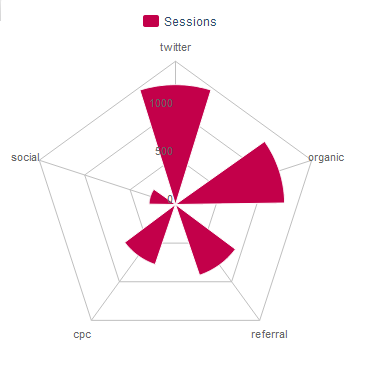 Column Overlay: This is an example of a spider chart with a column graph overlaid. Rather than connecting the data point by point, you are able to see the magnitude of the data directly from the hub of the web. This allows the viewer to focus on each individual variable while still getting an overall view of how all the metrics perform alongside one another. 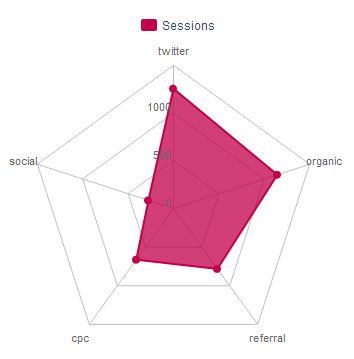 ea Overlay: If you prefer to see a solid connection
between variables, the best choice is the area overlay. Rather than highlight the magnitude of each variable, the data points are connected and filled in with a solid color to allow the reader to see the shape of the data easily. If you would like to represent more than one series using the area overlay, be sure to make your colors somewhat transparent as to allow the reader to see each of the series. However, representing multiple series at once might be confusing, so if you decide to do so we recommend sticking to two for optimized analysis experience. 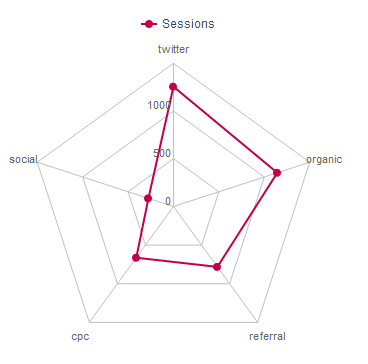 Line Overlay: Possibly the clearest of all options, the line overlay is simple and easy to follow, allowing the reader to take in not only the shape of the series, but also each variable of the chart. If you are going to show multiples series (or at least more than two) it is best to use the line overlay. By highlighting each series with a distinct and bold color the reader can follow the lines clearly and accurately.

One question that often comes up in the reporting world is if there is an alternative to the spider chart. Of course there is, however, the effectiveness of any available alternatives depends on how many variables and which series you would like to measure.

The bar chart is typically the first choice as an alternative to the spider chart. However, the main issue is that while you can still see how all variables are performing, you cannot get the same unified vision. In order to achieve a collaborative view you must use a stacked bar chart: 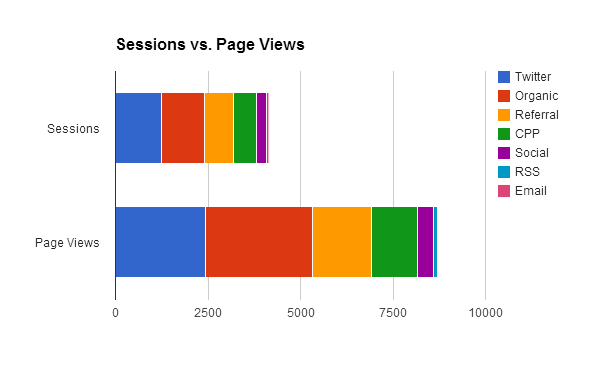 As you can see, the variables are harder to distinguish. The more variables you have the more complicated and inconvenient the chart becomes. A larger volume of data is easier to visualize in a graph like the spider chart, as the data is less clustered and clearer for analysis.

However, if you are deciding between an alternative or the spider chart, take into account who your chart will be presented to and the ease of effectively reading the visualization. As mentioned before, spider charts can be confusing, especially to anyone unfamiliar with them. If your readers are going to be left dumbfounded by how to read the chart, whether to start clockwise, or counter clockwise, then this is not the best graph to present them with.

How do you use spider charts to make your reports rock?